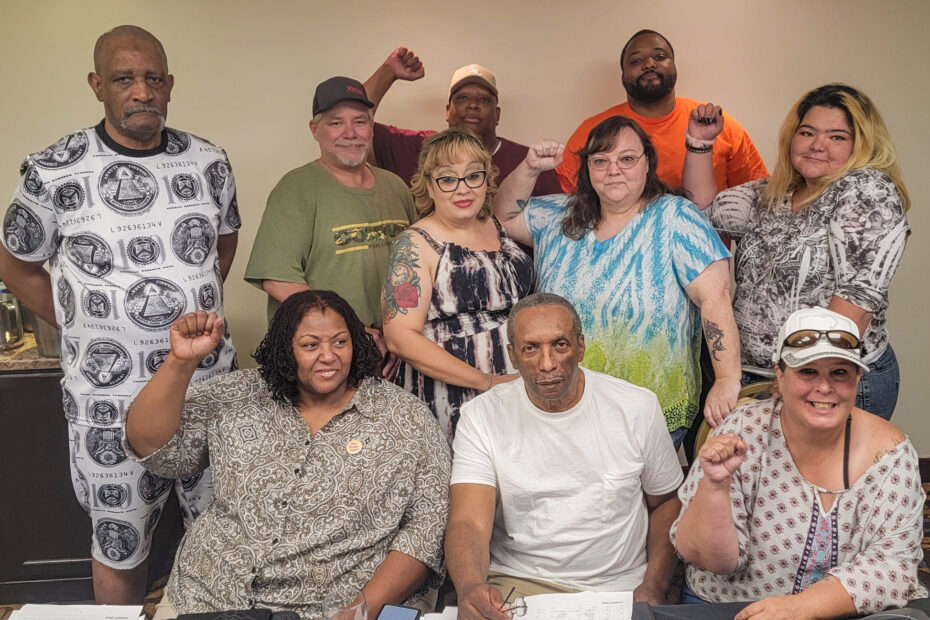 Last week, ten Union leaders came from California, New Mexico, Texas, Illinois, and Ohio, ready to begin bargaining with Hallcon. The UE Bargaining Committee gathered in California to prepare and deliver the first round of proposals to Hallcon management.

Late Tuesday, June 21st, the Employer announced that their chief bargainer contracted covid and that the Hallcon committee was not prepared for bargaining and would not join us at the table. UE Bargaining Committee members were very angry at this news. We collected our thoughts and got down to work, using this opportunity to fully develop our opening non-economic proposals.

The Union delivered the opening proposals via email on Saturday June 25, 2022. “We are not going to delay our fight for Dollars, not Dimes,” said Vincent Graves. “We started this fight when we sent our proposals to Hallcon,” he added.

For UE members that have not been through this process before, the Union and the Company develop written proposals to change parts of the contract. Each time we meet, we exchange proposals. We discuss them, sometimes we agree or disagree with a proposal from the other side. As smaller parts of the exchanged proposals get agreed to, they are called Tentative Agreements (TAs). At the very end of bargaining, members of UE across the country get the opportunity to see all of the proposed changes, debate them, and vote on them.

The Union begins bargaining with proposals on non-economic items such as scheduling, overtime procedures, job posting and awarding, board rotation rules, van safety, paid meal periods, and fatigue. We start with non-economic proposals because the moment we put wage proposals forward, the company will ignore all other changes we seek.

In the coming week, we will be reaching out to members to engage in the fight ahead. Contract Support Committee member meetings are being organized in all locations and we are developing plans for members to engage in actions that include the railroad client, our allies, and all members that want real raises. Stay tuned.

“They may insult us when they don’t show up, but we are focused on organizing our members to fight to make this a good job, so we all can pay our bills,” said Jessica Van Eman.

In 2020 the Union filed a grievance, alleging the Company had been violating Article 35.11, and in many parts of the country. Turns out Hallcon agreed and granted the grievance. For too long, Hallcon said it did not have the ability to automatically track the trips and pay them at a higher rate. We will spare you the details, but the Union kind of never believed this was the case. Turns out we were right. Hallcon came to UE this Spring, just before an arbitration date, they said, we have found a way to automate the trip search and payment process as outlined in Article 35.11.

The Company provided the UE with an initial list of trips drivers made from June of 2019 through the present. If you want to know if you are one the list, we need you to take the following steps by July 25th, 2022 in order to have your previous trips paid out.

A. Write to railcrewue@gmail.com, request the list of trips. You will be responsible for reviewing the trips and reaching out to the Union with any missed trips. Once identified, we will send the additional trips on to the company to be paid.

C. Driver must have a date when the trip was taken. If you do not know, the Union will not know.

The Company will flag the trips, as required by the contract and will be paid the extra minimum wage difference within 2 pay periods of the trip being taken. The additional monies will be paid as retro, so keep a log of your trips to ensure you are being paid correctly.

The grievance settlement will be finalized this Summer, so please dig out those old notebooks and screen shots to make sure you will be paid.

Deadline to claim additional trips or to inquire about trips you will be paid is July 25, 2022. Don’t delay, act today.

The Union has filed multiple grievances on Hallcon for their bringing in out of area drivers, and then they favor these drivers over the regular drivers. Hallcon’s practice not only violated our contract, but it negatively affected road drivers hours.

Hallcon denied the grievance and the Union is pursuing it to arbitration. A date will be selected soon.

UE Stewards are encouraged to continue to file grievances when managers bring in out of area drivers and the OOA drivers are used first, which is a violation of the contract:

ARTICLE 38 OUT OF TOWN WORK

SECTION 1. WORKING AWAY FROM HOME TERMINAL

For drivers working away from Home Terminal-Out of Area (OOA): Drivers will be selected from the volunteer list in seniority order from the terminal specified by the Director of Operations. Management shall use and maintain a regular out of area (OOA) list to be used for each terminal. Drivers must request in writing to be on the OOA list or to be taken off the OOA list. Interested employees will be awarded the positions in seniority order on a terminal by terminal basis. The per diem for OOA drivers shall be no less than $30 per day.

SECTION 2. WHILE AWAY FROM HOME TERMINAL

OOA drivers must only be used after regular drivers are unavailable, out of hours or on rest. Stewards should put in information requests to challenge managements position that drivers are not answering phones or other crap that comes out of their mouths. Make sure you let your chief steward know you are filing the grievance and CC a copy to railcrewue@gmail.com. Questions, call (312) 574-0733